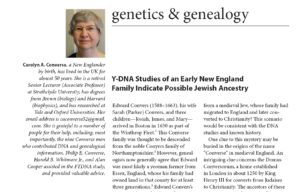 Text version is given here…

Edward Convers (1588–1663), his wife Sarah (Parker) Convers, and three children—Josiah, James, and Mary— arrived in Boston in 1630 as part of the Winthrop Fleet.1 This Converse family was thought to be descended from the noble Conyers family of Northamptonshire.2 However, genealogists now generally agree that Edward was most likely a yeoman farmer from Essex, England, whose his family had owned land in that county for at least three generations.3 Edward Convers’s ancestry prior to the sixteenth century is unknown, although various people named Convers, Converse, and similar spellings appear in medieval English archives.4

As a biochemist, I was interested in using DNA analysis to study my family’s genetic inheritance. In 2009, I asked my brother, Ross Converse, to be tested. A Y-DNA study with Family Tree DNA had been initiated by the late Philip E. Converse (1928–2014), but at that time no other Converses had participated. The results surprised us. The Y-chromosome DNA sequences of my brother and Philip Converse were haplogroup J2,5 a less frequent result in English populations.6

Examining maps of the incidence of haplogroup J2 and its presumed origin, I found that J2 is most common in the Middle East, the eastern Mediterranean, and in modern-day Jewish populations. The haplogroups J1 (the “Cohen Model Haplotype”) and J2 are very common among Jews.7 Was it possible that our Puritan Converse ancestors were descended from a medieval Jew, whose family had migrated to England and later converted to Christianity? This scenario would be consistent with the DNA studies and known history.

One clue to this mystery may be buried in the origins of the name “Converse” in medieval England. An intriguing clue concerns the Domus Conversorum, a home established in London in about 1250 by King Henry III for converts from Judaism to Christianity. The ancestors of these converts seem to have arrived in England after the Norman Conquest in the eleventh century. The converts were known, in Norman French, as les Conversi, or in the singular, le or la Convers. The Domus Conversorum was, therefore, the Home of the Converts.8

These converts were Ashkenazi Jews, and should not be confused with the “conversos,” the mostly fourteenth- and fifteenth-century Sephardic Jews in Spain and Portugal who were compelled to convert to Christianity and acquired Spanish or Portuguese surnames. Apparently, none of the Iberian converts adopted the name Convers(e).9

Edward Convers had three sons; two, James (1620–1715) and Samuel (1637/8–1669), have descendants living today. I contacted male descendants of James and Samuel, and nine men contributed their DNA to the study. Three are descended from James, and six from Samuel. These men are all from different lines of descent.10 However, all nine have the Y-chromosome haplogroup J2, and very similar sequences; none self-identify as Jewish.

Can we be certain that Edward Convers’s patrilineal ancestors in previous centuries in England also carried this haplogroup? Perhaps J2 was inherited from an unknown non-Converse ancestor, through a “non-paternity event.” Considering that the predominant Y-DNA haplogroups in England did not include J2, this possibility seems unlikely. The coincidence of the surname Convers and the history of the converts is another factor in favor of a male-line descent from a Jewish convert. However, a disruption in the Converse line cannot be ruled out.

To investigate further, we would want to know whether any link between London, the Domus Conversorum, and Essex might connect the medieval Jews to Edward Convers’s ancestors in that county. Not all the converted Jews lived in the Domus Conversorum, which was reserved mostly for indigent converts who had to surrender any property and possessions before entering. Some converts lived independently, and a few seem to have had prominent public lives—although the detailed histories of most of these converts are not known.11

After their conversion to Christianity, some converts were sent to religious establishments other than the Domus Conversorum. Four abbeys in Essex are known to have received converts.12 Several centuries later, most of Edward’s own family lived in northwest Essex, near Chipping Ongar and other towns only ten to fifteen miles from central London. Extensive research over the past century has delved into the history of Jews in medieval England. Some Jews were expressly invited to England by William the Conqueror to help with his takeover of the country, and in new building work—which required considerable funds. William was hampered by church laws forbidding Christians to charge interest on loans, but he could borrow money for his projects from the Jews, who had no such restrictions. Other Jews may have come as refugees from Rouen, which had banished its Jewish population a few years previously, or from other places on the Continent.13

However, two centuries later the situation changed. Other money-lenders, such as Italians and French financiers, appeared. At the same time, English anti-Semitism and persecution of Jews increased significantly. As a result, many English Jews emigrated, and some converted to Christianity. Those Jews who remained in England and were faithful to their religion were officially expelled in 1290.14

In the two centuries prior to 1290, the work of English Jews was mostly limited to money-lending. Other occupations were mostly forbidden to them, but Jews had been allowed to work as goldsmiths and some of these goldsmiths were named Converse.15 By the sixteenth century, Edward Convers’s own family members—presumably Jewish converts to Christianity—could engage in a variety of occupations. They were described in wills and other documents mostly as land- and property-owning yeomen.16 However, without a well-documented genealogical line that extends further back in England than the sixteenth century, we do not know how or when they might have converted.

In the fourteenth century, Norman French was dropped as the official language in England, in favor of Anglo-Saxon English. People previously described as “le Convers” were now known simply as “Convers.” Eventually, a final “e” was added to the surname, primarily after members of the family had immigrated to America. Other related names arose from medieval spelling variants of Convers (Cumbers, Combers, Confers, etc.), often in the same families. The name Cumbers still persists in England today, especially in Essex.17 Good historical and genetic evidence supports the proposition that the Converse family surname originally denoted conversion from Judaism, but without a documented line of descent from a particular convert to Great Migration immigrant Edward Convers, our theory cannot be absolutely proved. 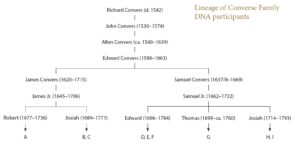 10 Subjects E and F are third cousins once removed, and all the other subjects are sixth cousins or more distantly related. The family tree is shown on Ancestry.com in “ConverseCooper 2018.”

15 Jews were permitted to be goldsmiths since gold and silver products were made from the same pure metals as circulating coins. T. F. Reddaway and Lorna E. M. Walker, The Early History of the Goldsmiths’ Company 1327–1509 and The Book of Ordinances 1478–83 (London: Edward Arnold Ltd, 1975), xxi and 323; Ralph Convers was an officer of the Company. William Converse owned a “mansion” called Gooldsmythes in Havering atte Bower, northwest Essex, according to his 1555 will, and Nicholas Convers of nearby Hadestock, Essex, was a goldsmith and refiner in London; see C.A. Converse, Converse Family [note 3], 862, 887.